God’s Way organisation wishes to start sharing information about the experiments that the Construction Branch has conducted in the Composite Mixes Project. The plan is to update you consistently by summarizing the experiment method, results and the motivations and desires of the team that affected the experiments. If you wish to get a more detailed overview of this project please follow this link to read the introductory post Programme Introduction: Building Materials Experiments.

The project team consists of:

Cornelius has already provided some introductory information about this project in a previous post Programme Introduction: Building Materials Experiments

However, to briefly recap:

The purpose of this project is to create new and innovative building/construction materials that meet and exceed all the industry requirements for safety and strength.

Meanwhile it will also aim to meet the requirements of God’s Way Ltd, some of which are:

The first experiments will trial using sawdust as a replacement or part replacement of sand in concrete products. That means to start, the experiments are to go through some trials and discover how the sawdust performs in various mix types that the team will create.

Our long term aim is to be able to make columns, beams, arches, domes, and panels of a variety of thicknesses for use in construction.

For these experiments our testing samples will be in the size of common house bricks – 230L x 110W x 86H mm. These house brick sized test samples will be small enough to be easy to handle and store, but large enough to give an easy comparison against a known product. We are not aiming to make bricks as a product.

This blog entry will be talking more about the experiment process itself since each test material will need to have a testing phase before the team can determine if any of the experiment batches are suitable for use in construction.

At the start the project the team’s initial goals were:

The team started the experiments using already known methods and ingredients and did not engage in any large leaps in experimentation. This may seem logical but was motivated by fears that each members of the team were honouring at the time. The team did not have any experience with creating experimental materials or testing materials and were very wary of jumping into experiments when they did not feel they understood the basics. The consensus of the team, at this time, was therefore to start slow, learn the process, and make small changes to the experiments as these progressed. This practice does not continue indefinitely and the team did start trying out newer materials and methods later in their experimentation.

The team decided that they would firstly create bricks that did not deviate from the ingredients that made most concrete blocks, these being sand, cement and water. Cornelius had researched what the amounts of these ingredients would need to be to make what is generally accepted as a strong concrete block used as a building material.

None of the team had any real experience with creating building materials from scratch. They truly wanted to test out how to make bricks and the method usually used to do this before they tried to make something new.

The second experiment was similar but with a change in the amounts of the ingredients to try and create a mix that did not need to use as much water as the first.

The third experiment included a new ingredient of fly ash to add strength to the concrete block material. Fly ash is a fine powder waste by-product of coal combustion in power stations. It was used out of curiosity as a repurposed waste product, but also because it has beneficial properties in concrete products, such as: reducing the amount of water required, improving workability, increasing end product strength at later stages and reducing moisture ingress as a finished product.

Cornelius had put together wooden form works that would allow the team to make a maximum of four bricks and one paver for each experiment. If the team had mix left over after creating four bricks then they would use the remainder to create the paver. The team did not make extra batches of the same mix so in the end, some of the experiments had between three and four bricks for each test batch and the paver could be anywhere from five to twenty millimeters thick.

As Cornelius has explained previously (Programme Introduction: Building Materials Experiments) creating a building material is much like making a cake – you need all the right ingredients, in the right amounts, mixed in the right way. Otherwise, in the case of a building material, you will be left with a product that is not strong enough to use in a building or that will not hold together at all.

Each material requires two types of ingredients, not including water, the aggregates and the binders.

There are other ingredients that can act both as aggregates and binders, like clay for example.

There are also two types of mixes to be aware of, since these determine if the end product will be a sturdy and strong material, a weak material that cannot hold under heavy weight, or a pile of mush.

The first is the aggregate to binder mix. Too much aggregate and our bricks would never hold together, too much binder and the material will not hold its shape when under the pressure of heavy weight. This mix is is determined by volume. For instance in our first experiment the mix ratio is 4:1 or four lots of sand to every one lot of cement.

The second is the water to cement mix (or water to binders as cement may not always be used in the experiments). Cornelius had researched the industry standard ratio of water to cement that would create a mixture that would dry strong enough to be used as a brick. Water needed to between 0.5 to 0.6 of whatever weight of cement was used (water/cement ratio of 0.5:1). Any more than that the material created has much less chance of staying strong over time. Too much water and the material will not hold its shape, too little and the material will not mix properly and will be unable to set into a strong material. The water to cement mix is based on the weight not volume like the aggregates to binder mix.

The teams experiments may need a different water to binders mix since they intend to use different materials and different kinds of binders.

These experiments were conducted in a large open shed on a property in Wilkesdale, Queensland. The shed had a concrete floor and had access to electrical power and lighting.

At the location was:

Since the team was only making a small batch of each material our tools did not need to be heavy duty and could easily be used, lifted and moved by a single team member. These tools consisted of:

The method used by the team for all three experiments was to:

Experiment #1 was a starting point to discover a suitable aggregate to binders ratio. This experiment only used the materials of sand, cement and water.

For each experiment the team wrote down their mix details and noted observations in a test batch document which is linked here: 20180418 Test Batch 001

During this test the team learned that they could not rely on achieving a certain volume for the test batch just by calculating the total volume of all dry materials and water before these were mixed.

When the ingredients were mixed the end product had a lot less volume than the team had calculated there would be. The team figured out that the water and the tamping conducted during the creation process got rid of a whole lot of air that was residing between the sand and cement particles, even during the measurement step of the process. This means that the team had planned to make four bricks and one paver using this mixture but were unable to do so. They instead made 3 bricks and a paver and the paver was a third of its intended height.

To be able to mould this mixture into bricks the team had needed to use more water than they had planned. Too much water in a mix will decrease the overall strength of the batch. The team figured the extra water was required was because of the very fine nature of the sand that they were using and that they needed more water to soak the sand so that it could bind properly with the cement and make it pliable enough to make bricks.

In short, the mix sacrificed strength of the material so that the team could work it properly and the team determined that this could be avoided by either using less sand or more cement and water.

The second experiment mixes and method were very similar to the first but with a change in the amounts of the sand to try and create a mix that did not need to use as much water as the first.

The test batch details and noted observations are in a document which is linked here: 20180418 Test Batch 002

So the second test batch the team created the same type of material except they lessened the amount of sand they used so that they needed less water to make the test batch wet enough to be workable. It worked and the team was able to create a workable mix without adding, what they thought, was too much water.

This however did mean that they had less material to use and only made two full bricks, one 3/4 Brick and no paver. 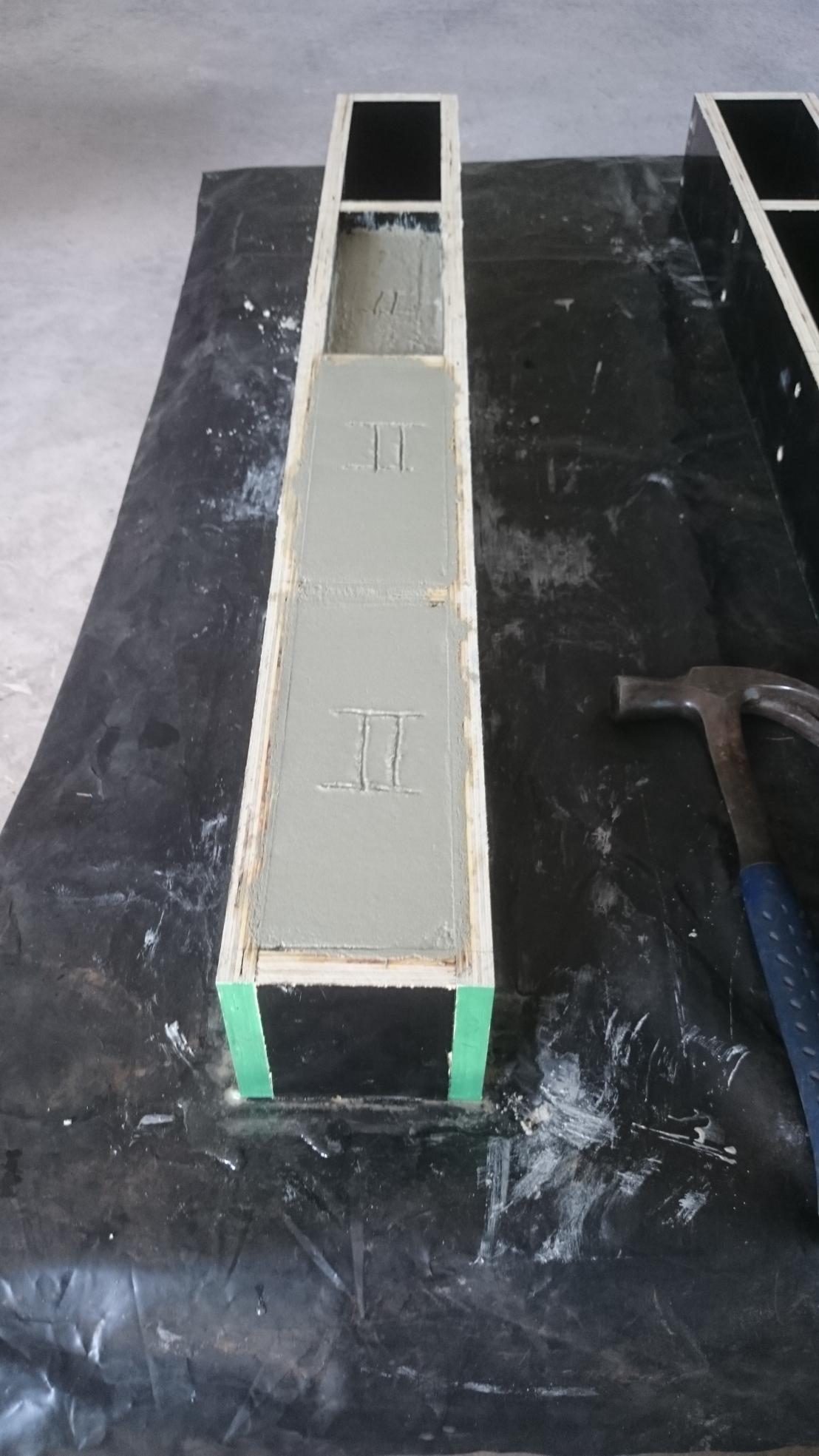 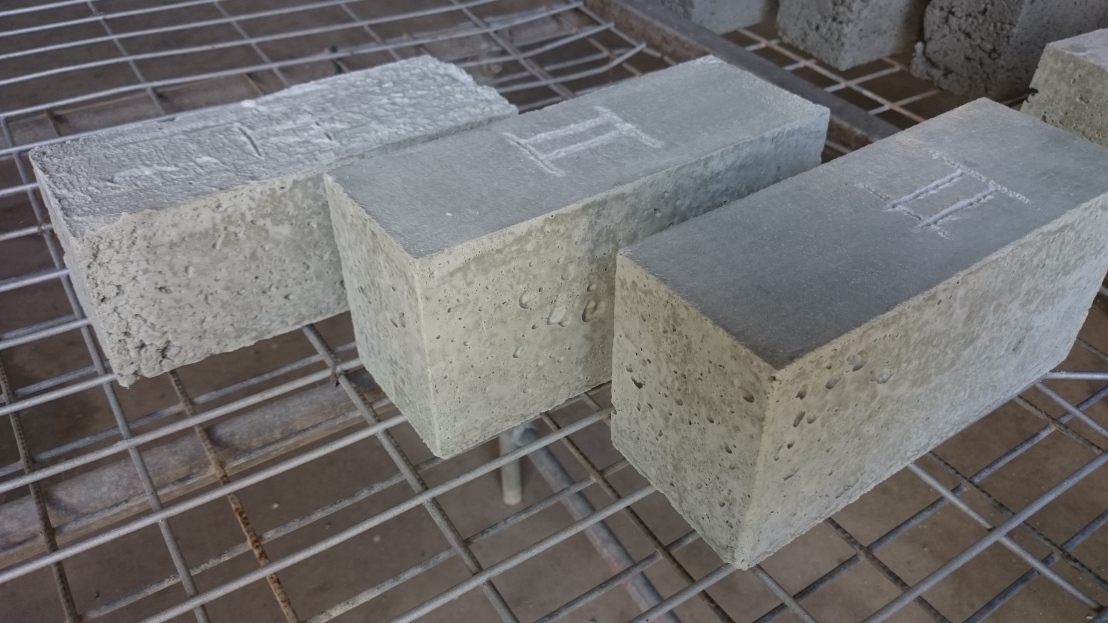 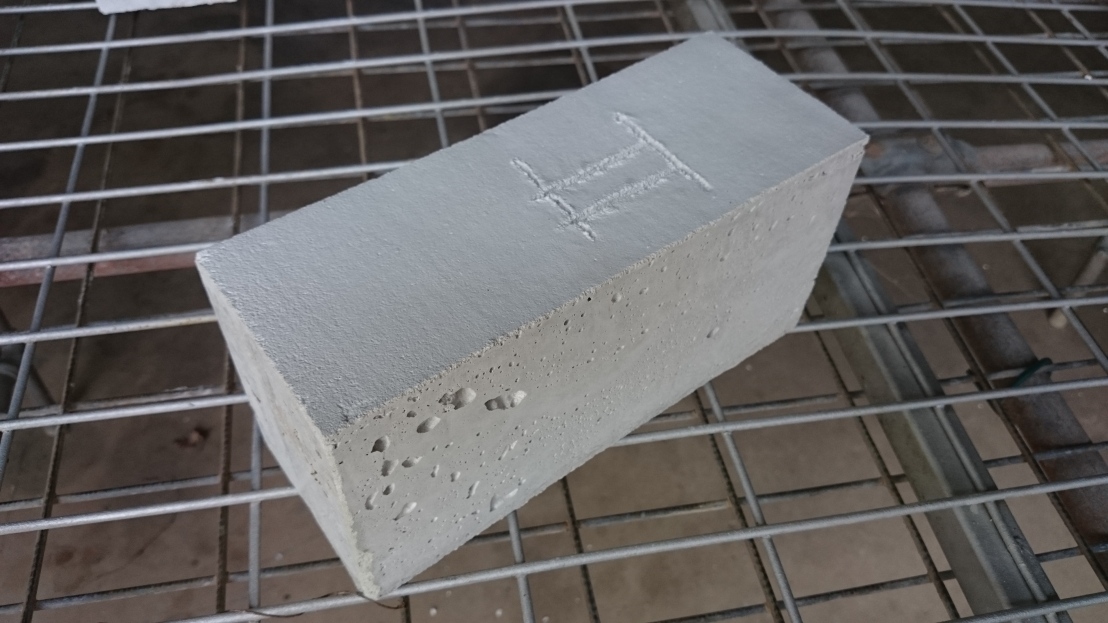 The third experiment included a new ingredient of fly ash to add strength to the material.

Why add fly ash? Because if fly ash is combined with cement it reacts with the lime in cement to creates a stronger substance.

It wasn’t until weeks later when the team looked over the data they realised that they had not prepared tests 3 to 6 properly. They had mistakenly used weight to calculate the aggregates to binders mix instead of volume.

The test batch details and noted observations are in a document which is linked here: 20180418 Test Batch 003

In these notes you will notice some of it is in bold. These are the additional notes added after the mistake was noticed.

The team had to be careful when moving the fly ash since it was so fine that it would explode in a cloud of grey particles if it was dumped carelessly into the mixing bucket.

The members of the team initially theorised that the addition of fly ash seemed to create a mixture that was a little drier than the previous two. However this was probably because of the mistake where the team had not used volume in their measurements and so had created a mixture with too much aggregate.

The fly ash did make the bricks noticeably dark grey in colour. 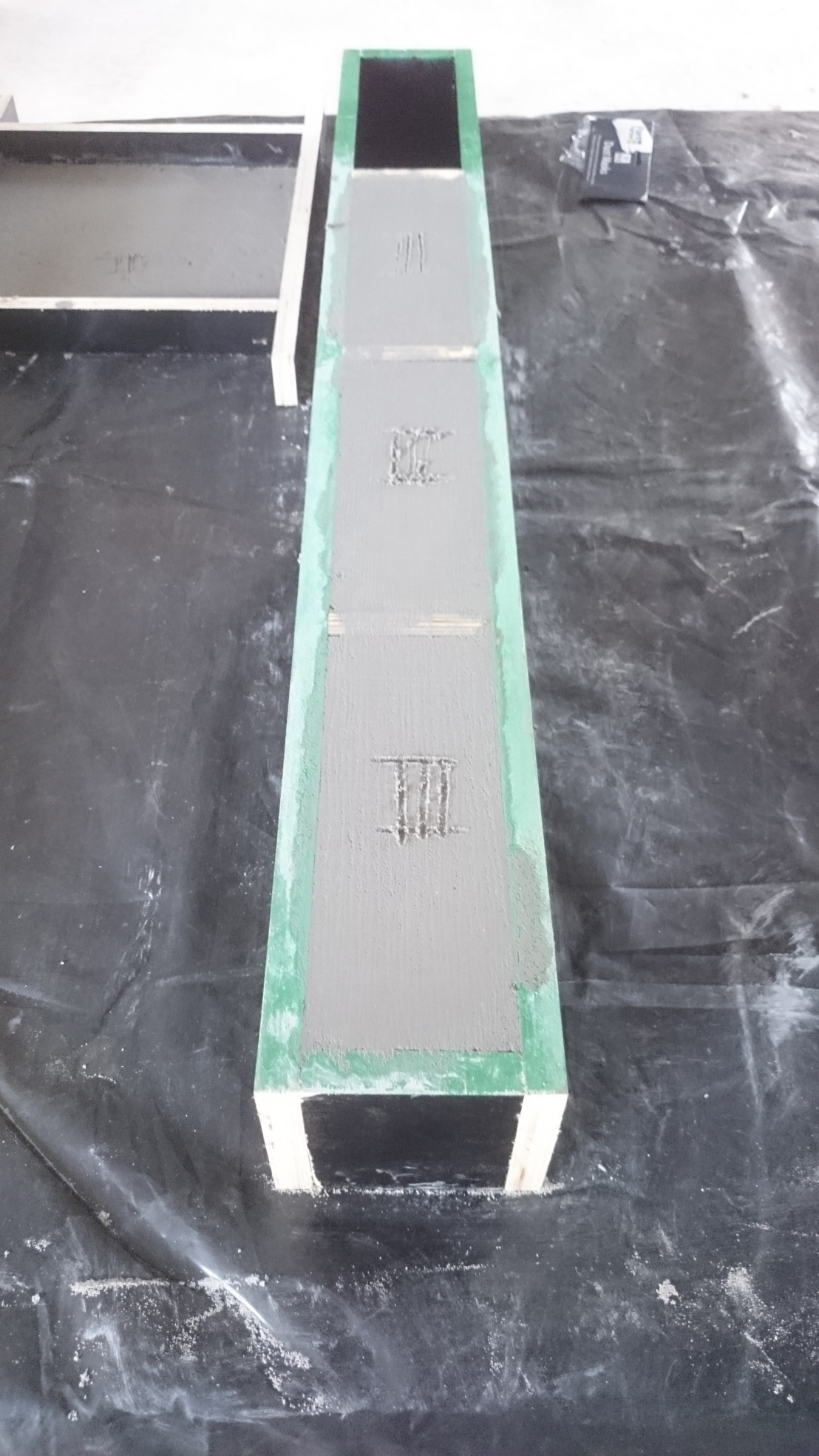 AJ Miller (Jesus)
God’s Way Visionary & Founding Member
Information Sharing Designer, Manager & Auditor
Jesus continues to mentor all God’s Way members and volunteers regarding how to implement and develop projects in harmony with God’s Principles. He provides the vision and design for all current God’s Way initiatives and audits all projects to ensure that they meet with the requirements laid out in the God’s Way Company Constitution.

Mary Magdalene (Mary Luck)
Managing Director
Information Sharing Auditor & Editor
Mary is mentoring God’s Way Ltd members in how to write and present information. She spends many hours reading and editing the posts that are published on God’s Way Ltd’s website to ensure they are a truthful, accurate representation of what is happening in the organisation.