Hi again from the Construction Branch team! Its time to update you about the Composite Mix Building Materials project.

If you wish to get a more detailed overview of this project, please read the post: Programme Introduction: Building Materials Experiments

A summary of the first day of this experiment can be found here: Composite Mix Building Materials Experiment Summary: April 18 2018

The project team consists of:

These experiments were conducted in a large open shed on a property in Wilkesdale, Queensland. The shed had a concrete floor and had access to electrical power and lighting.

At the location was:

Since the team was only making a small batch of each material our tools did not need to be heavy duty and could easily be used, lifted and moved by a single team member. These tools consisted of:

In the previous post Composite Mix Building Materials Experiment Summary: April 18 2018, under the heading ‘Experiment Mixes’ you were introduced to two different types of mixes and how they are measured.

The first mix is the aggregates to binder mix, which is measured by volume.

A sand/cement mix ratio could be 4:1. This means if I use 1 litre of cement then I use 4 times that amount of sand (4 litres).

The second mix is the water to cement mix (or water to binders as cement may not always be used in the experiments) and this is measured by weight.

As with any experiment, some of what the team tries is going to fail, sometimes with spectacular results! And sometimes the team is going to make mistakes.

If the team learns from the mistakes made and shares what they learn with you all then even the failures and mistakes will not be a waste of time and resources.

The experiments that were conducted on the second day of experimentation are summarised below and, wouldn’t you know it, the team got the math wrong.

During the experiment tests the team used the wrong type of measurement when mixing the ingredients. Specifically they calculated how much they needed of their dry material in kilograms and not volume.

Depending on the properties of each ingredient, the team either used more or less of what they actually intended for the experiments.

Funnily enough, the end results did not end up as big messes that would not hold a brick shape. Since the team still used the right ratio mix for water and binders, the test bricks did harden and there were no glaring obvious problems from using the wrong measurement type. This may be why the team ended up making the same mistake from test 3 to test 6 before Cornelius realised that there was a problem.

The team did end up re-doing these experiments on a later date and those results will be shared in a future experiment summary.

You will notice that our test batch documents for each experiment have been edited (using bold text) to show the volumes and the true mix ratios that were used at the time.

The method used by the team for all three experiments was to: 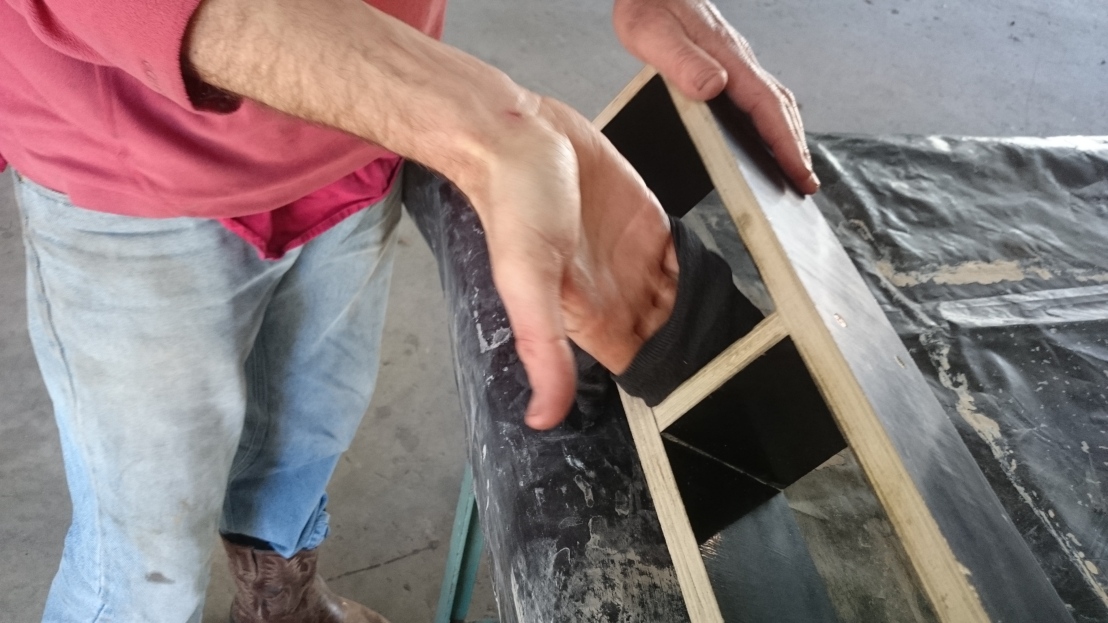 Oiling up the Form Work

During this test the team used lime as a binder.

A mix using lime initially hardens by the de-hydration of water from the mix and then continually by the absorption of carbon dioxide from the atmosphere during setting and during its entire product life. It does however take longer to set than cement, and the end product is not as strong as cement as a binder.

Cement dries harder and more brittle while lime has more elastic properties than cement, meaning that lime is more flexible and better able to absorb structural movement without cracking. If it does however crack, it can self-heal via a crystallization process through the absorption of carbon dioxide, closing up the crack.

Lime products are breathable meaning that moisture vapour that may get in or build up can also get out. Concrete does not have this quality.

The manufacturing process to make the lime releases carbon dioxide into the atmosphere, but the lime products produced absorb carbon dioxide over their lifetime. By this quality, lime can be considered carbon neutral.

Lime is a major ingredient in the production of cement, however it not currently believed that cement based products are able to sequester carbon dioxide as lime product can.

While we are using hydrated lime in this experiment for construction purposes, lime is also used in the food industry, in the garden, and in manufacturing industries, just to illustrate some of the variety of its uses.

The lime that was used

The initial goal was to try an experiment of 3:1 mix but the team made a mistake with measurements, as described earlier in this blog post.

The test batch details and noted observations are in a document which is linked here: 20180419 Test Batch 004

The test batch needed a lot of water to be able to work the mixture properly into the molds. This could be because the team used a lot more lime than was actually needed, due their mistake. The test bricks were softer for longer, compared to previous cement bricks, and the bricks dried slower over time. The slower drying time is consistent with what the team understood about the properties of lime.

When the mixture was placed into the molds (formwork), the sides of the formwork were tapped with a hammer to cause vibration of the mix. This vibration allowed air bubbles trapped in the mix to float up to the surface. If this was not done, then the bricks tended to have more air trapped in them.

Air pockets are likely to occur when the mix is drier because when it’s drier it’s more difficult for the materials (aggregates) to consolidate. The result is then called ‘honey combing’ when there is a lot of these little air bubbles that are trapped in the mix. One of the team’s aims is to get all of the particles in a mix to be fully consolidated so that there is no or very little air pockets. As you can probably guess air pockets reduce the strength of the material.

When the mixes have less water in them then even vibrating the sides of the form work will not actually release the air pockets trapped inside of them. That is why the team compress the mixes as they are pouring them into the form works. They used a piece of wood to ram down the mix and get the mix into the corners of the form work.

The team used two different methods of compacting the material into bricks. Two of the bricks were compacted but the third was vibrated and the team also used a small piece of timber to ram the material mix into the corners of the form work.

After the bricks had dried and were removed from the formwork, the team could see if there were any air pockets visible. It was decided that both the ramming and vibrating methods were successful and to apply them in all further experiments. 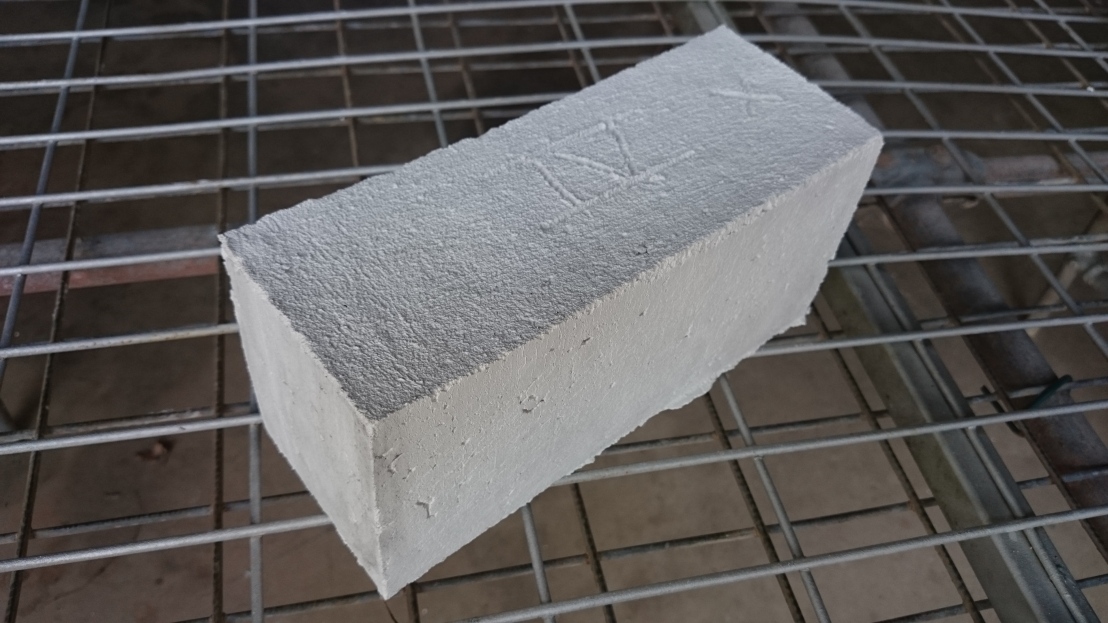 This experiment was conducted with a mix of sand, cement and lime. During this batch the team started using a new ingredient called plasticizer.

A plasticizer is also known as a high range water reducer. A plasticizer is added to a mix to make the mix seemingly wetter without adding water to it. You could say that it stretches the properties of the water already in the mix. The benefits of this are that it maintains the strength of the final product by not needing to dilute the mix by adding more water to it to achieve a workable mix.

Often bricklayers use a few small drops of dishwashing liquid in their mortar mix with the same plasticizing effect. This makes the mix more ‘creamy’ rather than ‘grainy’ too which makes it pleasing to work with.

In this experiment however, we have used a commercial plasticizer, not dishwashing liquid.

The test batch details and noted observations are in a document which is linked here: 20180419 Test Batch 005

The team was amazed by the difference the plasticizer made in the mixture. The mixture became very malleable with only a small amount of the ingredient, even though the team was not using much water.

The plasticizer is an incredible material and a very small amount goes a long way to change the entire thickness of the material. In the end the experiment material was a little too thin. It was just a difference in 50ml that changed the mix from dry to floppy and soupy (as Corny wrote descriptively in the test batch notes).

If you have a look at the next photo you can see just how it is dripping over the sides and seeping underneath the formwork.

This experiment was conducted with a mix of sand, fly ash and lime. The team also used plastisizer again.

The team wanted to test how lime and fly ash would work together. Fly ash was used in previous experiments and you can find information about the product in the previous post, Composite Mix Building Materials Experiment Summary: April 18 2018

The test batch details and noted observations are in a document which is linked here: 20180419 Test Batch 006

Fly ash makes a big difference to the colour of the material. The material turns from white to a deep grey with oil-like streaks and dots of darker colour along the surface.

When these were drying the team was trying to understand why oil was coming up on the surface of the bricks. Cornelius is confident that the fly ash was mixing with the oil the team rubs on the inside of the molds and bringing this oil to the surface. No other ingredient we have used has done this, and fly ash is not an oily or greasy product.

The oil is something the team rubs on the inside of the form work to prevent the poured material sticking to the form work, like you would oil a baking tin when cooking a cake in the oven.

The air trapped in the mixture came up to the surface but stayed on the surface as bubbles when these bricks dried. That had an interesting, if somewhat messy, look.

Due to the use of plastisizer the mix was again extremely thin. The team agreed to use less plastisizer in the long run. 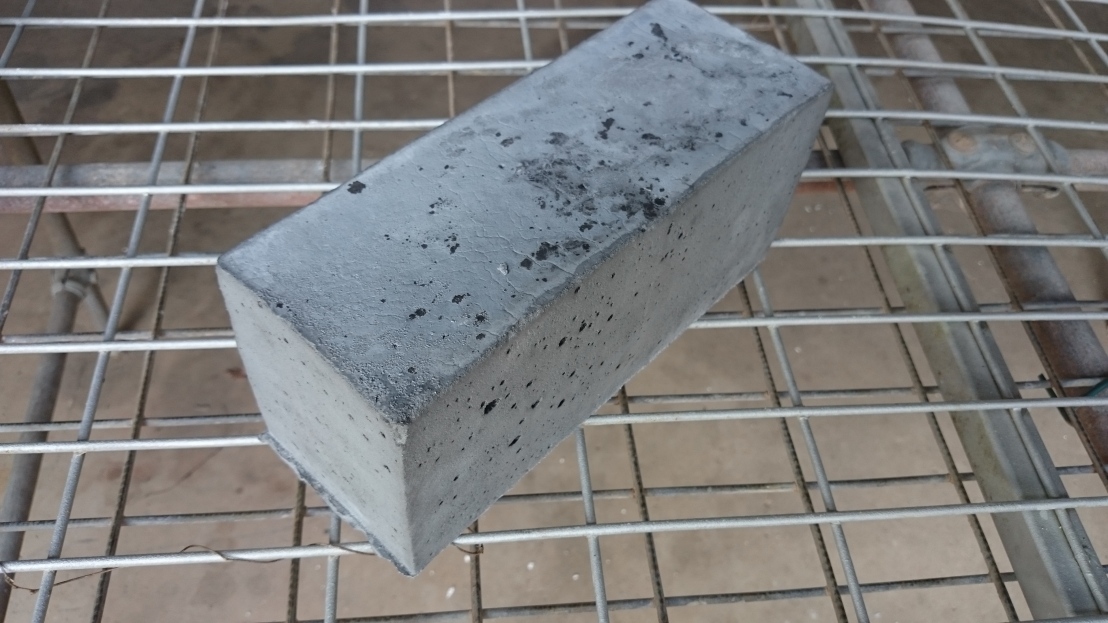 After these experiments the team rectified their mistakes and no longer got volumes and weights mixed up. Hopefully sharing the mistake helps you in some way, especially if you are starting your own experiments to create building materials.

AJ Miller (Jesus)
God’s Way Visionary & Founding Member
Construction Branch Manager
Jesus continues to mentor all God’s Way members and volunteers regarding how to implement and develop projects in harmony with God’s Principles. He provides the vision and design for all current God’s Way initiatives and audits all projects to ensure that they meet with the requirements laid out in the God’s Way Company Constitution.

Mary Magdalene (Mary Luck)
Managing Director
Information Sharing Auditor & Editor
Mary is mentoring God’s Way Ltd members in how to write and present information. She spends many hours reading and editing the posts that are published on God’s Way Ltd’s website to ensure they are a truthful, accurate representation of what is happening in the organisation.