Welcome to another update from the Construction Team on the Experimental Building Materials Programme, Composite Mixes Project. The desire for this project is to develop a strong and durable building material, which in part uses waste material instead of wholly mined materials in its creation.

You may have been following this experimental project via previous posts, where we have been endeavouring to replace sand in concrete type products with sawdust as far as is possible, whilst still achieving an end product that can be used in construction.

A Brief Update So Far

The experiments so far have been to:

What we have learned so far:

In the local area here in Wilkesdale, Queensland, Australia you may be forgiven for thinking that some areas are reminiscent of Mexico or Northern Africa, based on the number of cactus plants around. These plants are not native to Australia. The particular cacti species that thrives locally is called the Prickly Pear or Opuntia cacti. It can grow up to 4-5m tall and throughout the year produces small, lime-sized fruits that are red in colour.

According to the Queensland Historical Atlas the British introduced the Prickly Pear cactus in the late 1880s. There is a mealybug insect that feeds on the cacti and produces a red dye called cochineal. The British used this as an essential dye for their soldiers red uniforms. At the time, Mexico had a monopoly over the cochineal dye business and the British had ideas to set up their own supply, so brought the cacti plants to Australia.

By the mid 1920s more than a 24 million hectare area of Southern Queensland and Northern New South Wales was now prolifically covered in this plant. Ironically 24 million hectares is actually the size of Britain.

Many ideas on how to eradicate the cacti problem were trialled such as burning, crushing, chemically poisoning, digging it up and there were even bounties paid to the killing of birds such as Emu, Currawong and Crows to prevent the seeds from being spread.

Fortunately, a biological answer was found in the form of a moth native to South America called Cactoblastis cactorum, or as it’s more colloquially known as – Cactus Blaster. The larvae of this moth feasts on this variety of prickly pear, and eggs were initially released in many areas. Within 7 years much of the prickly pear was destroyed.

Thank-you to the Queensland Historic Atlas for that brief history lesson!

However, nearly 100 years later the cactus is still continuing to grow in many areas today, growing abundantly as an invasive species, maybe just not in the density that it was in the past.

There are some properties of the Prickly Pear cactus plant that could prove beneficial in the structure of composite mixture building products. From personal observations, their cactus pads (nopals) contain quite a lot of water when they are cut and this watery sap substance is slightly sticky. 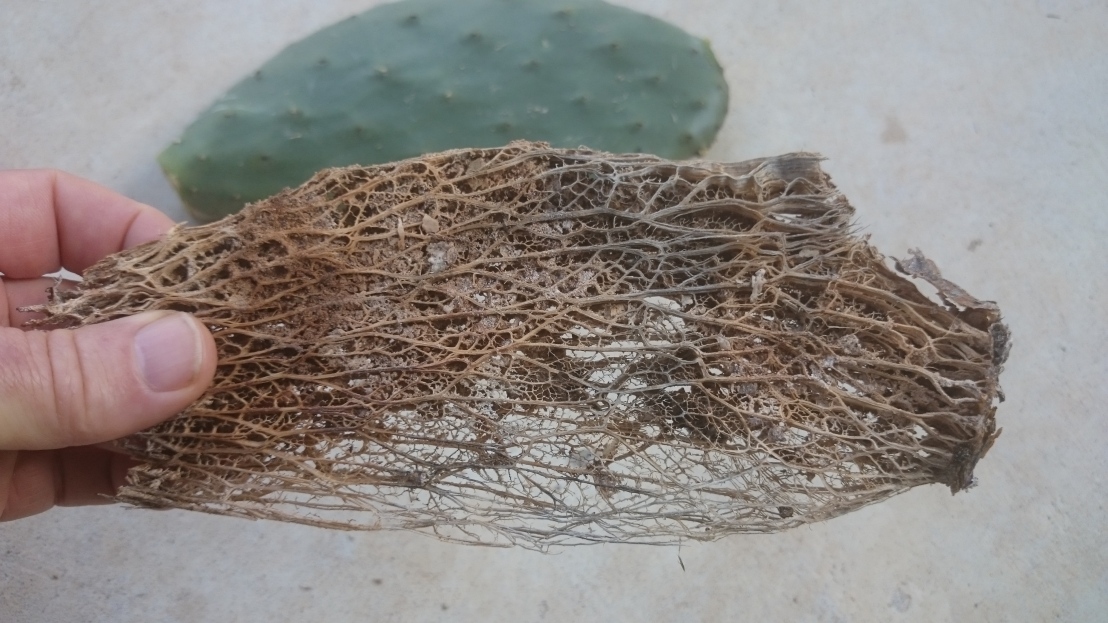 Cornelius is working with a the theory that the sticky sap juice of the cactus pad may have not only binding properties (being sticky), but also additional properties which help the qualities of water to “stretch” further. This would be much like a man made substance called super-plasticizer (or high range water reducer) that assists in using less water in the final mix, thus avoiding diluting the strength characteristics of other binders such as cement or lime. (Further explanation of the properties of binders, aggregates and water can be found in the section ‘Relationship between Materials’ of the post: Programme Introduction: Building Materials Experiments)

Essentially super-plasticizer makes the mix strong by not requiring as much water to be used. However the mix still maintains its liquid or flow properties, so it can be wet enough to be workable into a mould.

Having a natural product with similar properties to the super-plasticizer would be beneficial because adding the sawdust to the mix usually demands slightly more water. The cactus juice may also add some flexural or elastic properties to the final product that may reduce any potential cracking. Additionally the plant fibres present in the cactus pads can act as a strengthening reinforcement to the final product.

These theories are based on simple observation and feeling/intuition rather than anything scientific.

Upon the idea to trial the cactus as a part of a composite mix, research was done into the plant juice, and it was found that the juice may also have some waterproofing qualities. There have been reports that, historically, Mexicans in rural areas used the juice in a lime mortar as a method to extend the durability of the external finish to their houses. Click here to view a reasearch paper on this topic (Source: Juan Antonio Ferriz Papi, https://www.researchgate.net/profile/Juan_Ferriz-Papi)

When a tree or pad falls to the ground, multiple new cacti grow from the old one

If none of that turns out to be effective in the God’s Way Ltd composite mix materials project, both the fruit and the pads of the prickly pear are regarded as edible. That may be a follow up investigation of a different nature for projects in another branch of the organisation.

Firstly some cactus needed to be turned into liquid. This was easy. Take a walk outside on most Wilkesdale properties and within 15 metres are prickly pear trees.

A pair of BBQ tongs, a long bladed knife and a bucket were required to harvest some younger pads from the cactus tree. These were selected as they seemed to have a less woody and more liquid nature. Then the cactus pads were taken to the kitchen, cut into smaller pieces and fed into an older food processor. The resulting ‘mush’ was then stored in a jar and left to settle overnight.

The pulp and juice water in the ‘mush’ were then separated by straining.

The juice component was weighed and calculations were made to replace approximately 1/3 of the water required for the water to binder ratio of the mix with cactus juice.

The sample mix bound together well. And a lower water to binder ratio was achieved. So it appears that the cactus juice may have some super-plasticizer qualities. Further investigation is warranted.

The test samples created retained the smell of the cactus juice which was a pleasant, cut grass kind of smell.

The cactus pulp that had earlier been separated from the juice was spread on top of a paver test sample, in as an additional experiment to see if the pulp had any waterproofing qualities. 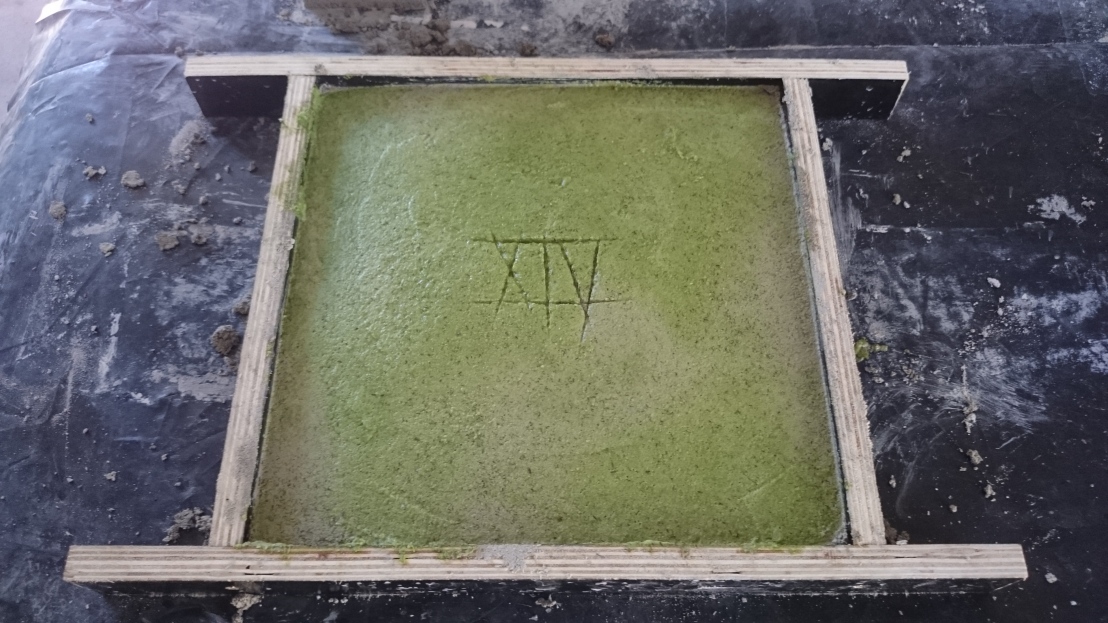 An Interesting Side Experiment

As a part of some extensive environmental projects that God’s Way Ltd was undertaking during this project, a temporary ground cover that could have seeds implanted into it (to give the seed shade and retain moisture for germination) was needed. So the following experiment took shape.

After straining the cactus juice used in the brick batches (#14 & 18) a pulp by-product remained. This pulp was a waste product and part of the ethos of our experimentation process was to make use of waste products.

The cactus pulp was mixed with yet another waste product (shredded paper) and made into a spreadable paste. 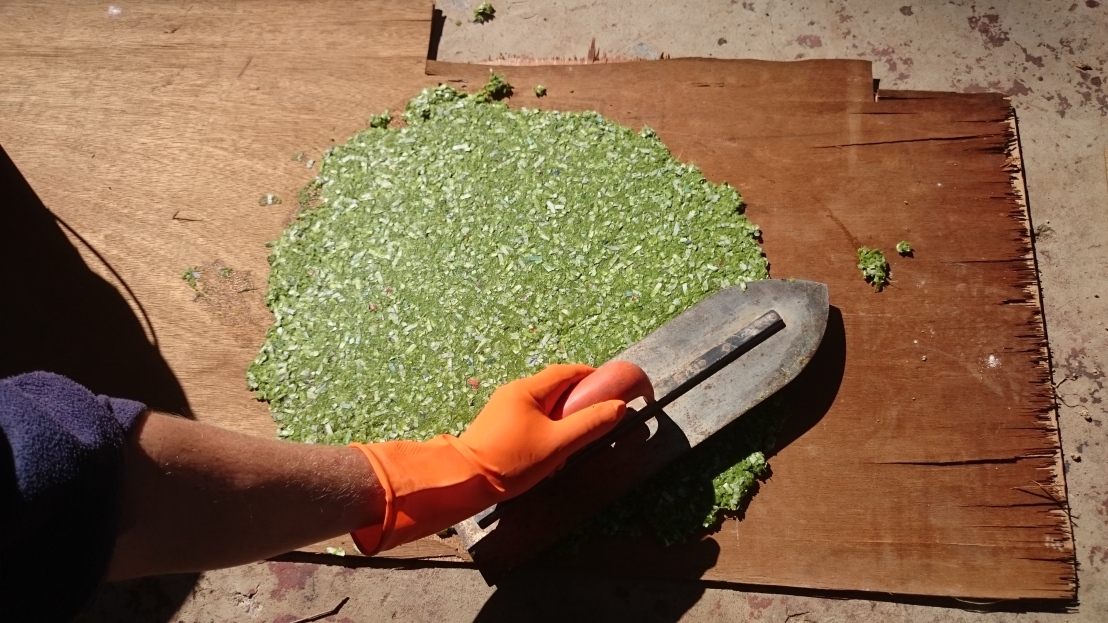 Trowelling cactus pulp and paper mix into a thin pizza

This was left on a piece of 4mm thickness hardwood plyboard for over six months in the weather. Over that time the ply became de laminated and fell into many parts. The cactus pulp/paper was still intact and could be picked up and flexed. 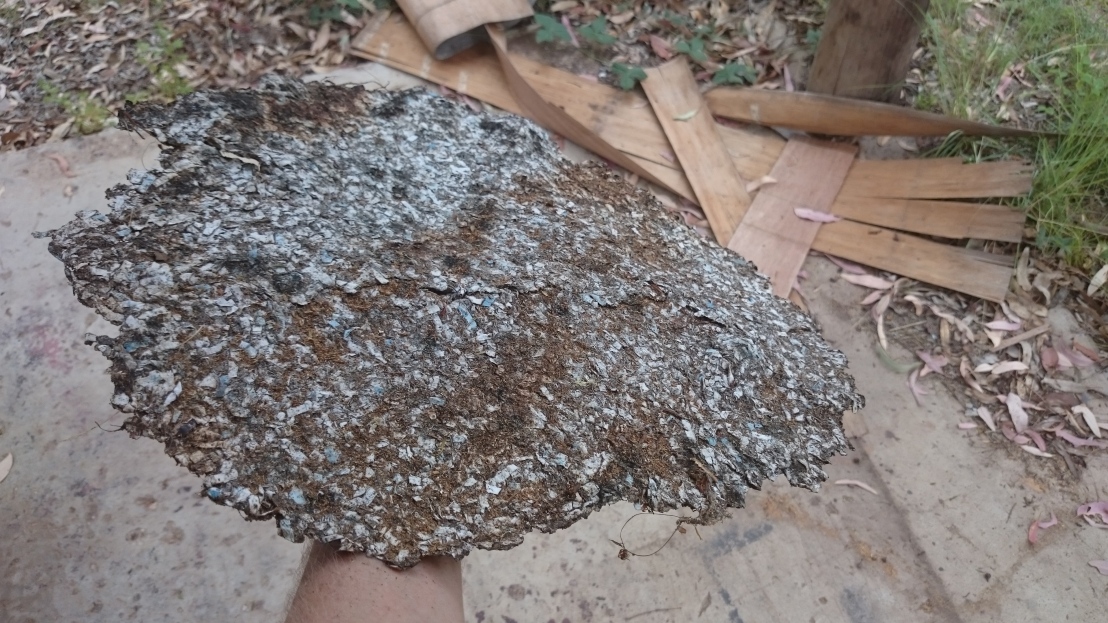 Cactus pulp and paper mix pizza, marinated and cooked in the weather for over 6 months

This side experiment has given us some indication that the cactus juice has some waterproofing qualities. This could be helpful to aid in natural protection of the sawdust in mixes. The natural fibres in the cactus pulp also offer tensile strength (as indicated by the ability of the product to flex) as well as binding properties (that caused the sample to remain in the same shape and form over time).

Testing an idea based on inspiration, intuition and reasoning based on naked-eye/sense observation of the plant’s properties was far more fun than experimenting based on already established parameters of composite products. Not knowing if the cactus experiment would be a complete fail or a success was more exciting and thus there was more feeling of enthusiasm for the experiment.

At this stage the project team are experimenting with different ideas and materials and using simple observation during the mixing and after drying to ‘measure’ the results. Basic comparisons are also made against other samples from previous tests and control samples. The project will eventually conduct testing for parameters such as compressive, flexural, and tensile strength and permeability testing too. Some of these tests will be created by the team, as the equipment used for industry testing is often only made for laboratories, which means that they are specialised and beyond the scope of economical purchase for God’s Way Ltd at this time.

When the team has developed reliable tests which can be performed by God’s Way Ltd and have found success in some of the samples, the test samples can be repeated, and those new samples sent off for professional testing.

In regards to the cactus plant being used as a potential product in the composite mix experiments, it is looking like a promising option.

We could be a little bolder next time and use a lot more of the cactus juice perhaps in a future test.

AJ Miller (Jesus)
God’s Way Visionary & Founding Member
Construction Branch Manager
Jesus continues to mentor all God’s Way members and volunteers regarding how to implement and develop projects in harmony with God’s Principles. He provides the vision and design for all current God’s Way initiatives and audits all projects to ensure that they meet with the requirements laid out in the God’s Way Company Constitution.

Mary Luck (Mary Magdalene)
Managing Director
Information Sharing Auditor & Editor
Mary is mentoring God’s Way Ltd members in how to write and present information. She spends many hours reading and editing the posts that are published on God’s Way Ltd’s website to ensure they are a truthful, accurate representation of what is happening in the organisation.